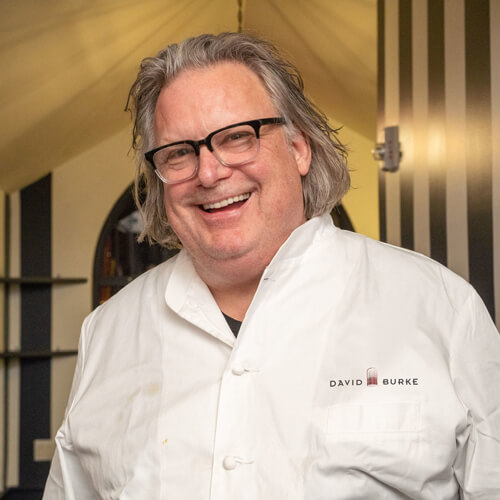 By David Burke & The Fresh Market

Known as much for his playful personality and whimsical presentations as his culinary genius, Chef David Burke is a pioneer in American cooking. At age 26, the New Jersey native earned his first executive chef position at New York City’s legendary River Café. His career skyrocketed from there as he received rave reviews (including a coveted three-star New York Times review) and won numerous awards. Burke has also opened several successful restaurants, appeared as a frequent guest on TV’s Top Chef, authored two cookbooks and introduced his own line of cookware.

Q: What inspired you to become a chef? Did you always want to pursue culinary arts?

Curiosity inspired me; curiosity spurred by the kitchen environment—its creativity, camaraderie and excitement. It’s like being on a sports team and every day is different. I didn’t know a thing about any of that until I got my feet wet with a dishwashing job as a teenager. So, no, I didn’t always want to pursue the culinary arts. As a kid, if someone had asked me about that I wouldn’t have known what they were talking about. I wasn’t even interested in food. My mother wasn’t a good cook and neither was my grandmother. I’m not one of those chefs with fond memories of cooking with multiple generations in the kitchen. It wasn’t until I was working in a professional kitchen that I realized there was career potential for me in food. I saw there was a ladder that could be climbed and felt I could do it and do it well.

Q: How did you earn the nickname “The Culinary Prankster”?

TimeOut New York once gave me the title of Best Culinary Prankster. They made it a category one year for their annual awards. But I think Gael Greene, the legendary New York Magazine food critic, first used the term for me. Might have been culinary jokester or maybe even trickster. Prankster, jokester, trickster, they all refer to the playful approach I have always taken with my menus and food. I use humorous verbiage on menus (“angry lobster” and “couch potatoes”), and I have fun with presentations. An item that’s a signature at almost all my restaurants is black pepper and maple glazed bacon that hangs from a miniature clothesline, attached by mini clothespins. It makes people smile. Sometimes the humor or whimsy is the main ingredient itself. I gave smoked salmon a pastrami persona, poached pork shank in pork and duck fat (which some thought was a joke until USA Today named it “Best Dish in America”), and created swordfish chops, which we numbered like the duck at Tour d’Argent in Paris.

I don’t have a current favorite restaurant and don’t want to. I think it’s better for me to embrace a distinct aspect of each one that I particularly like. Maybe it’s the way some of my artwork is displayed in one or the kitchen design of another. But I have had a favorite and that was David Burke & Donatella, which was world-class in every sense of the phrase. It was my first real venture with my own money and I helped design it. We had a tiny kitchen loaded with pure talent and we did the impossible—daily.

Q: Throughout your career, you’ve won numerous awards, is there one that means the most to you?

No one made much of a big deal about it at the time, but it was the Nippon Award for Excellence presented by the government of Japan in 1988. I was also the only American to ever receive the Meilleurs Ouvriers de France Diplome d’Honneur. And probably the last because the French were so upset it had gone to an American! It was a great honor, too, but somehow the Nippon award had—and has—more significance for me. Maybe because it was from a foreign government in recognition of my creativity and skill, as opposed to being the result of a competition, which is what the Meilleurs Ouvriers de France is. I’m also very proud of having been named an Ernst & Young Entrepreneur of the Year for New Jersey in 2021, because it’s a business award, not a culinary one.

Q: What is your greatest accomplishment?

Being alive at 60 with so many exciting projects on my plate. That’s the short, flip answer. The more thoughtful one, family aside, is understanding what I’ve done and how I did it. Being able to reflect on that and to appreciate how far I’ve come. I went to Paris for my birthday in February. Having lived there as a student on next to nothing, working for free to learn all I could about my craft, it was great to stay at the best hotels and eat at the best restaurants. It felt good—I feel good about where I am. Not cocky, but good, and I think that’s a great accomplishment. I’m looking forward to the next decade of creating, sharing, and learning.

Q: Do you have any advice for any aspiring chefs or restauranteurs?

Make sure you’re really passionate about being in the restaurant business. There are easier ways to make a living! If you’re sure about that, then surround yourself with the best you can afford and commit to always be open to learning. Learn about food, its history and the “why” of its preparations. You should never stop learning and always keep an open mind.

Q: In 2021, Ernest & Young honored you with the Community Impact Award. Why is community advocacy and philanthropy important to you?

I’ve done charity work all my career and happily so. Chefs are nurturers; giving back and helping people are elemental to us. That’s part of our nature and part of hospitality, which is all about being of service. If you don’t take care of your community, it falls apart. We should never forget that.

Q: What are some ingredients or items that you are sure to never run out of in your kitchen?

Bacon! We always have lots of bacon. Also red meat because we have aging boxes full of it. We age our beef with a Himalayan pink salt process for which I hold a U.S. Patent. So, we always have plenty of that salt, too. Lobster dumplings and our cheesecake pops are also always on hand. Then, of course, there are the basics like regular salt, pepper, butter and olive oil.

Q: After decades of culinary success, television appearances and innovation, what direction do you see yourself going into next?

I want to go into education with a cooking school of some sort. I can see myself teaching at the bakery I bought in May that’s been an anchor in its community for 85 years. Called Dixie Lee, it will continue to be a community asset with expanded offerings and new programming like cooking classes. I’m also working on a realty TV show about a culinary apprenticeship program I want to operate from my house.